We arrived in Paris on a lovely day and were collected for our transfer to the hotel in the centre of this magnificent city – BUT it was pure madness on the roads – unbelieeeevable actually and we inched our way (in contrast to our trip to Berlin with ze lady taxi driver) to the hotel with the driver selecting Jazz for us to listen to and the first tune was “Georgia on my mind!” Perfect because all the grandkids are on our minds and we miss them. The one in charge of the B’s was very ‘appy because he found the Tour de France on the TV in our beautiful ‘Otel room so we decided on a cuppa to recover from the traffic and watch the last 40 km of the tour while we rested. Today the Tour is riding the mountain Ballon d’Alsace and finishing in Belfort which is the exact same course Vern rode when he competed in the Age Group Triathlon World Champs in Belfort in 2013 and got 10th in his age group so it brings back special memories.

There is a major problem with the bathroom though which is causing a little stress – I see there are some scales in there and I am praying to all the saints and the angels that they are broken or that they are so complicated to use that we simply cannot figure it out! Now there actually is another problem with ze bathroom and I tried to sort it and called for help from the one in charge of the B’s (which, when all said and done, should also be ze bathroom shouldn’t it?) and he spent 10 minutes also turning all levers – four of them if you please – in all directions and the result was we had a river of water coming from the dinner plate on the ceiling, the handheld shower AND the tap filling the bath – none of which was warm. Eventually, we gave up and I had a lukewarm shower with water spouting from absolutely everywhere – unbelieeeeevable! This ‘Otel needs to write a manual pronto before the next Kiwis arrive ‘ere! The boss is recovering from this ordeal by watching all TV channels in all languages so clearly he is now multi-lingual which, if he had told me this, would have been very handy to know at ze hospital in Wittenberg last Saturday!

We also had another minor issue when we were going out to find dinner tonight. We noticed that there was an elevator just outside our room which we hadn’t arrived in. Very handy we thought so we pressed the button, got in and the numbers were all a bit different but we thought we had pressed the lobby – no such luck – we ended up in the kitchen in the bowels of the hotel and then, in trying to escape in a big hurry before we were caught we opened a door into a private function where people were enjoying cocktails and, seeing a sign for Exit very quickly made our way through the group trying desperately not to be noticed! And we have only been here about 3 hours!!

Well, we are now on board the Scenic Gem – you can Google the boat and it is really beautiful. We have unpacked and checked the water level and all is well. I have had a problem with ze water though – in the bathroom which will not surprise you but honestly, if you look at this photo would you be able to work this out. I did a little washing and put it in the shower to rinse it. I bent over and turned the little handle at the bottom which looked simple – but the problem was that there are three shower roses on this blimmin thing. One is at the top, one is on the flexible hose and you hold it and I had not seen the one in the middle which sprays your nether regions I suspect. Well, you can guess the problem – I bent over into the shower and got that one right in the face because I had not even seen it. So our Serbian cabin attendant came to visit just after this episode and just after I had soaked up the water all over the bathroom. I asked him for a lesson – he and I went into the shower and he was all confident about the workings of this thing. However, he had not seen the shower rose for the nether regions either and when he turned it on he got it in the side of the head and was soaked! Then he tried all the other buttons and there was water coming from everywhere. So the lesson ended with me making notes – you push these for that and that for this and God only knows how you get the water spraying at you from the centre but ve don’t vant zat! I am thinking I will write to President Macron and perhaps Bridget might have some spare time to write a manual! And now we have discovered that you can get coloured lights as you shower – Fire, Ice etc – a discotheque ze shower! Is this a new French thing?

The Lime scooters are here in Gay Paree and they are trying to mingle with a zillion bicycles, two zillion vehicles and many zillion pedestrians, sirens, horns and impatient people and I can tell you for sure it is crazy and I don’t know even one swear word in French.

The riverboat left Paris as we were enjoying the dinner – what was three courses on Viking has gone to five on the Gem! (The scales worked by the way but the news was not so bad!) We were ecstatic that this beautiful boat is actually moving so we came back from dinner and sat on our verandah as the boat glided peacefully out of Paris. People were enjoying friendly gatherings on lots of houseboats tied up along the Seine and they were all waving at us and we at them. We passed under bridges and through locks and arrived in Les Andelys at noon. Merveilleux! 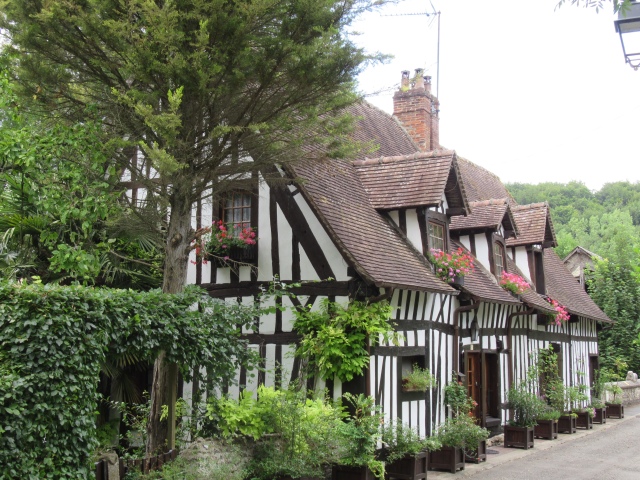 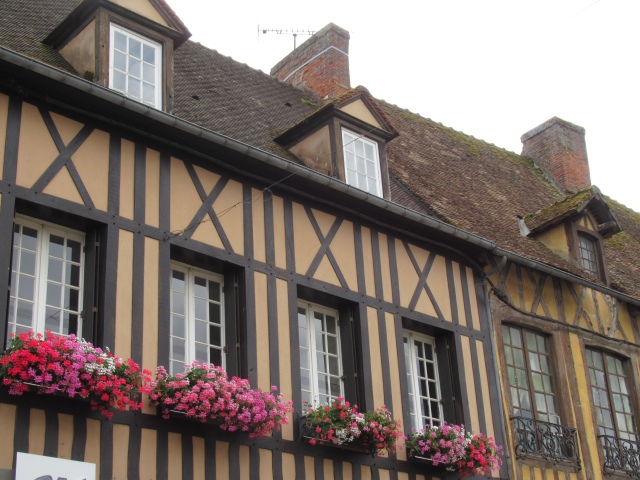 Our sightseeing was a lovely drive passing wheat, sugar beet and potato fields, and plantations of rye, barley, canola and flax to Lyons la Foret, a little town dating back to the 12th Century and surrounded by the largest beech forest in Europe. After spending some time walking around this quaint little village in Normandy we visited Chateau Fleury la Foret and tasted some cider made on the property.

We sailed again around dinner time to arrive in Rouen, the capital of Normandy, where we are staying for two nights. This morning we have done a little walking tour of Rouen made famous by Joan of Arc who was executed here in 1431 and where, at the site of her execution a modern church has been built to honour her. We visited the very large Cathedral of Our Lady which dates back to 1250 and is a mix of Gothic and Renaissance architecture – there are over 800 classified historic buildings here including the oldest restaurant in France. This afternoon we rest on our little verandah and watch the cyclists passing by and the French ladies returning from the market – including ze Otel Manager on ze boat who has just ridden by with a case of peaches on the back of ‘is bike! The boss is happy because the Tour de France is on and yay – today it is in English! Tomorrow may well be a sombre day as we visit the battlefields. It is also Bastille Day here so we are thinking there may well be fireworks going off as we sip the champagne! 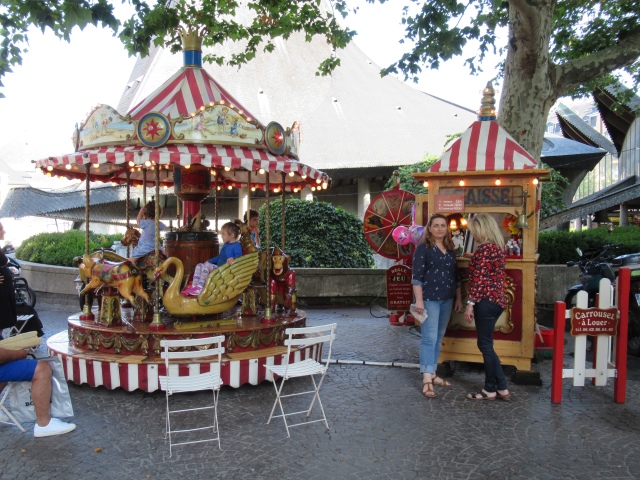 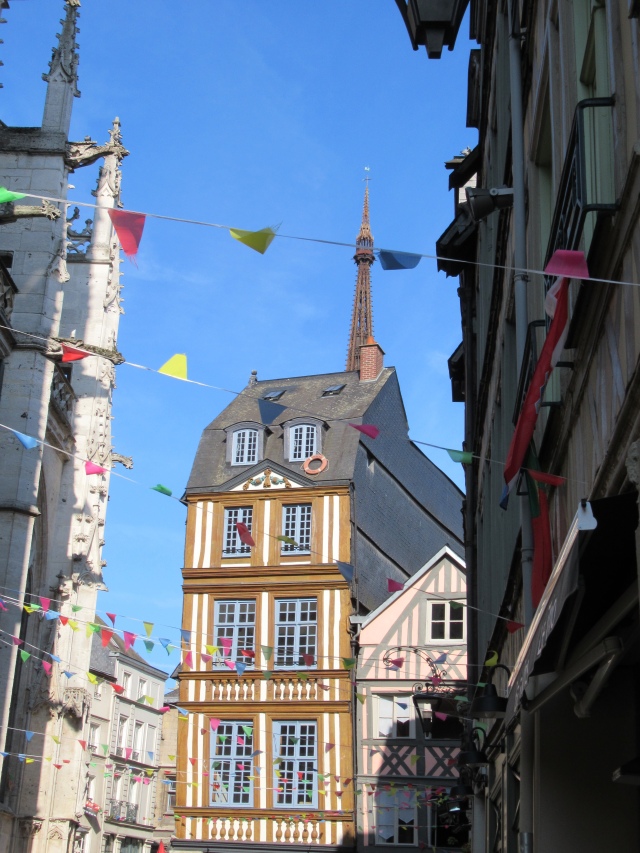 We finished our walking tour of Rouen by dropping into a few little French shops – as you do and I just happened upon a few things I liked (and the one in charge of the B’s liked them too and even picked one out for me) – and they had a sale at this little shop called Un Jour Ailleurs (which translates “Another Day”) so here on another day in France the bank manager spent a few Euros but only a few because there was a sale and if you bought two items you got another 20% on top of the 40% in ze sale! Voila!

Au Revoir – we are back onboard and it is time to eat – again!

2 thoughts on “Paris to Rouen”