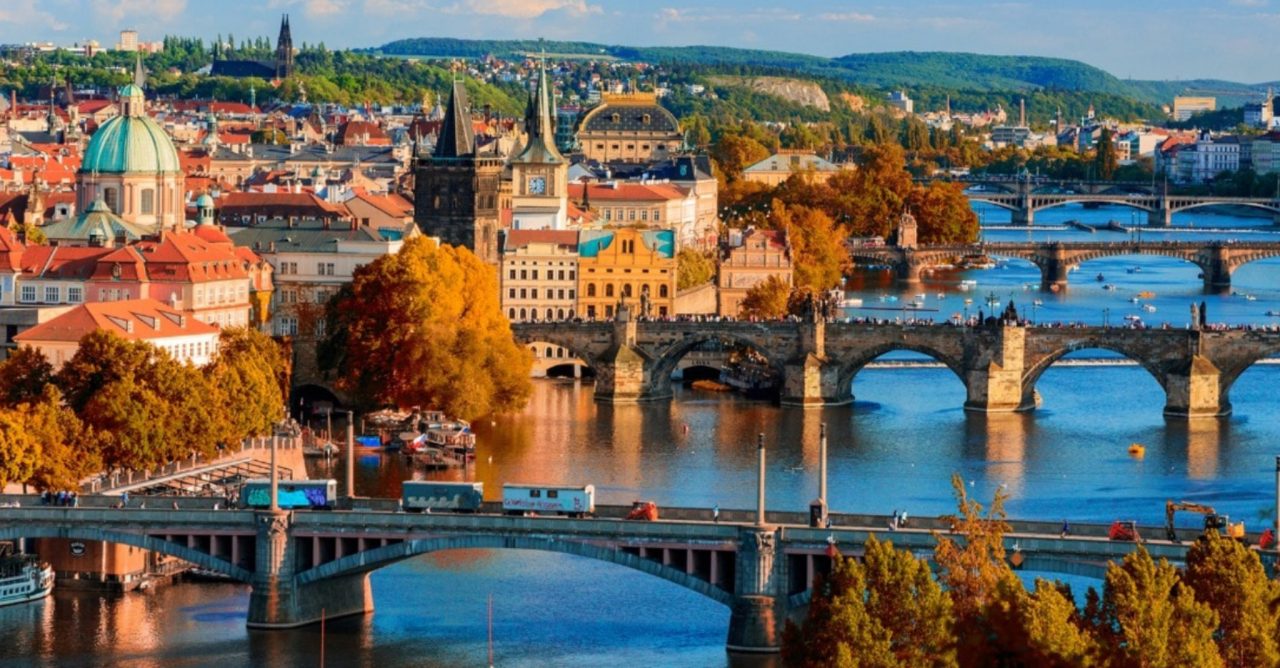 Bonjour from the little harbour of Honfleur

Before we left Rouen we walked with a group to see a light show projected onto the exterior of the 12th century cathedral. It started at 11 pm because it doesn’t get dark here until around 10.30 pm and was the most spectacular light display we have ever seen. 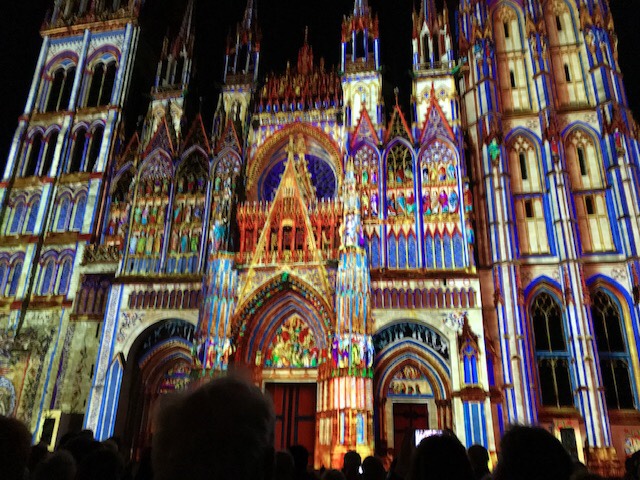 Monday morning saw us arrive in the medieval town of Honfleur at the end of the Seine where the river flows into the English Channel. This long boat had to come through the entrance of the tiny harbour which was 110 feet wide. Having got through the entrance the 110 m long boat had to turn around to reverse further down the tiny pier to get to its berth – this was rather a tight manoeuvre. We went up onto the top deck to watch all of this and to my surprise no one was on the bridge! Holy Moly! Then we noticed ze Captain and First Officer were actually driving the boat from a little station on the edge of the port side – the local Pilot was also onboard so all was well – they didn’t need my help! As you can imagine, the one in charge of the B’s (not ze boat) was very intrigued with all this manoeuvring and also all the yachts in the harbour.

Eventually we were alongside our berth at 9.30 am and we set off for the walking tour in beautiful Honfleur which dates back to Renaissance times with quaint tiny lanes and an ancient wooden Church of St Catherine. Many artists resided here, and still do, and there are galleries everywhere. It is beautiful and after our walk we came back to the boat to eat again (because zat is what you do – several times a day!) 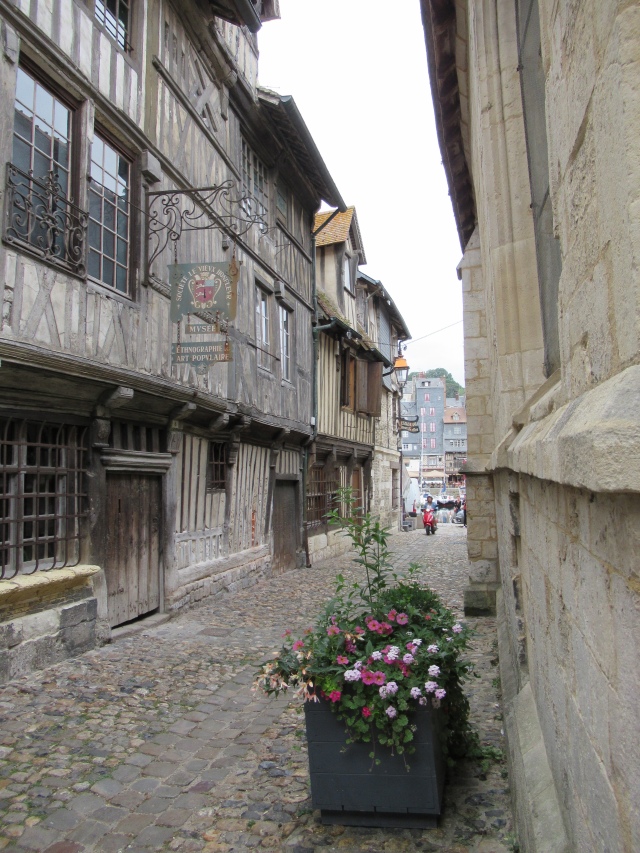 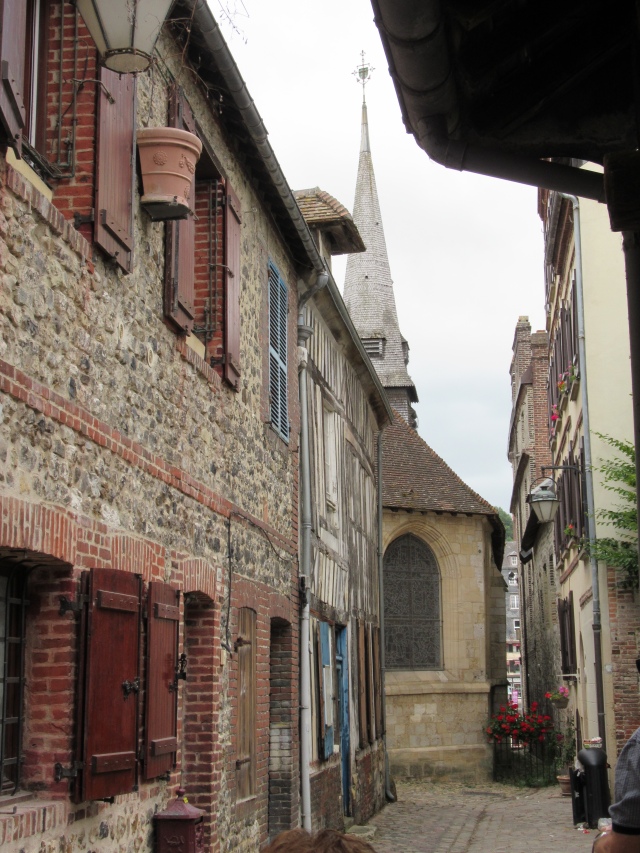 Then a short rest to prepare to go off the boat to a local residence for Sundowners and then back for dinner. Heaven forbid – we thought we might need to do a short marathon before afternoon tea time so we can fit into the clothes for this little adventure. We all set off in three buses for a short ride out of Honfleur to visit this cider Manoir which had a very large orchard of apple trees for the cider, cherry trees and a paddock where there was a little family of charolais cows. They also produced Calvados – now if you have tried Calvados you will know that it has a reputation for killing anything inside of you. The boss enjoyed the cider, enjoyed the calvados and then was chosen to assist a very good magician do a trick by tying a rope around this guy and then to tie knots before holding a black booth around him to escape. It was quite hilarious as the French guy ended up calling the boss “Vin” and he wanted Vin to do various ties and knots wiz ze rope and Vin was getting the translation a little mixed up (perhaps not helped by the Calvados he had just enjoyed!) I had the cider and thought I just had to taste a tincy bit of the Calvados whereupon I almost choked and if anyone had lit a match I would have been breathing fire! It took me about 10 minutes to cool down after that little episode but it didn’t seem to have any effect on Vin!

The good news is every tap, lever, button, disco light and faucet is working in the bathroom department and that in itself is cause for celebration!

After the sombreness of the battlefields in northern Normandy last night we were invited to dine at the small restaurant on this Scenic Gem called l’Amour with a group of guests. It was a really great night with a special chef explaining what he had spent the day cooking for uz (and we hoped he had chosen everything with zero calories but it didn’t appear to work out zat way!) It all started with a lovely champagne mixed with a little limoncello and lavender followed by hors d’ouevres, white asparagus soup, duck breast with a lovely jus and vegetables and several desserts plus a lot of laughs and entertainment by the waiters. Following dinner we went onto the top deck to watch the Captain sail this very long boat out of Honfleur’s tiny harbour and this morning we awoke in Caudebec en Caux. This morning’s excursion was to Fecamp, about a 40-minute drive passing small farms with the pale charolais cows and the Normandy cows with the distinctive brown circles around their eyes, just like sun glasses. We drove on past areas of pretty bushlands on windy roads up into the highlands crossing the Pay de Caux. The countryside is picturesque, the sun is shining, the farmers are tending their crops and the houses are a mix of new and very old and colourful flowers are blooming everywhere. Magnifique and on we go to Fecamp and the Benedictine Monastery where the monks are making ze cider in readiness for owa visit! Of course we need this because it is 10 am! Heaven forbid! 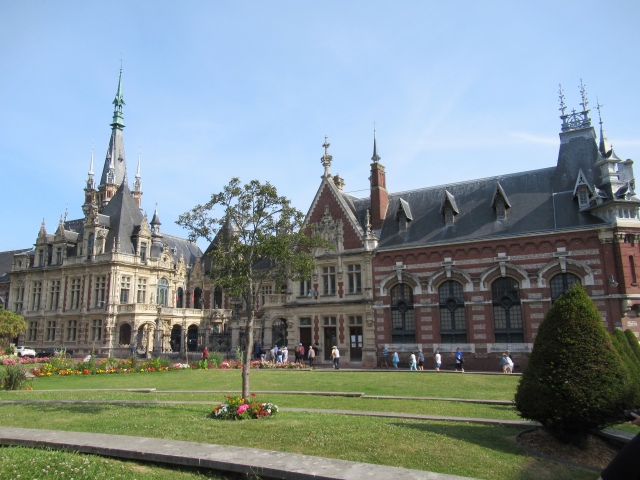 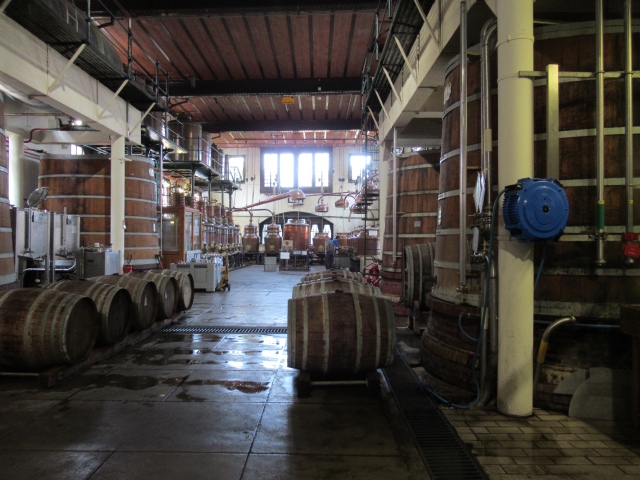 We pass the oldest tree in France dating back to 911 in the village of Allouville. Personally, I can hardly believe this when we are trying to keep alive the olive trees at Pauanui and it will be a miracle if they last 11 years let alone over 900! This area is primarily agricultural (as is much of Normandy and it gets quite a lot of rain). The soil is rich and there are large areas growing flax for linen. In fact 50% of the linen production comes from Normandy and the area has been known for its textiles for centuries. The crop of flax can only be planted in the same place every two years because it drains the soil of minerals so other crops are planted in alternate years. They are developing new materials to replace some plastics from the flax being harvested now. After it is cut, dried and baled it is sent to Italy and China to make into linen. In this windy and wet area the apple trees for the cider grow well and it is also known for its cider. In Normandy you don’t see the sunflowers and lavender of Provence or the vineyards of the Loire or Burgundy, Bordeaux or Chateneuf du Pape so the scenery is different from our other visits here. We get to the beautiful Benedictine Monastery and have the tour, view the magnificent artefacts and artworks and go to the distillery to watch the just three employees (not monks!) distilling the special Benedictine liqueur from its 27 plants and spices and taking up to 2 years to make. Brandy is added during the final blending. Then it is onto the tasting – not as strong as the calvados (which they say kills everything but ensures you live ze long life) but quite strong just the same! Oh the things you do in France at 10 am! Then we set off in ze bus which just fits down some of these little cobbled streets – sometimes we all need to breathe in so it can fit! We are on our way back to the boat because it is time to eat again and we leave Caudebec-en-Caux for Vernon so the Vernon is very ‘appy sitting on ze bed watching the Tour de France before it will be time for ze ‘appy hour and to eat yet again – tonight’s invite is at the Table la Rive and another special degustation put together by another chef for a selected ten of us! C’est la vie!

We pulled alongside the pier in Vernon around 1 am and voila – this morning there are three boats tied up together but luckily the Gem arrived first so our neighbours have to climb through our boat to get to shore! This morning our tour director organised for the group to travel just 5 km up the road to Giverny and to be the first group allowed into Monet’s beautiful garden. We were here six years ago with the zillions that arrive later in the day so it was very special and rare to be the only ones here and to walk peacefully through the entire garden before the hoards are allowed in. The display of thousands of beautiful flowers was just magnificent at every turn and we popped into the Monet house before the queues and then walked up the road to Monet’s gravesite. Giverny is a very small place with just 400 inhabitants – it is pretty and the houses have lovely gardens but the rest of the world arrives on their doorstep every day! It was then back to ze boat for ze lunch and then the other boats untied themselves from our boat and slipped aside so that we could drift out peacefully down the river to La Roche Guyon where tonight we go to a classical concert at Chateau de la Roche Guyon, the grounds of which are adjacent to where this long boat will be tied up for a few hours and then we leave for Conflans. Vunderful! 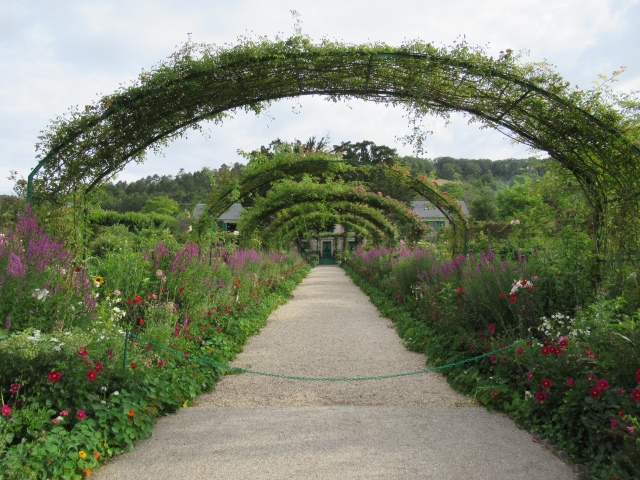 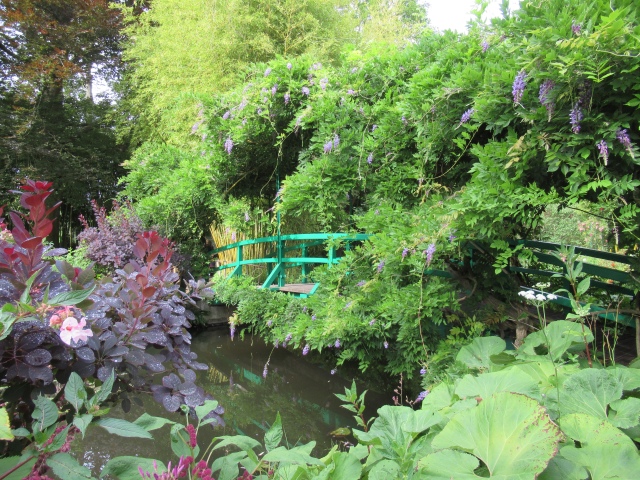 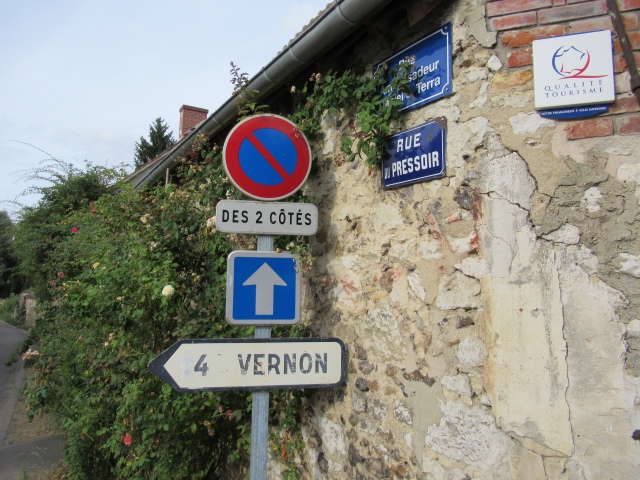 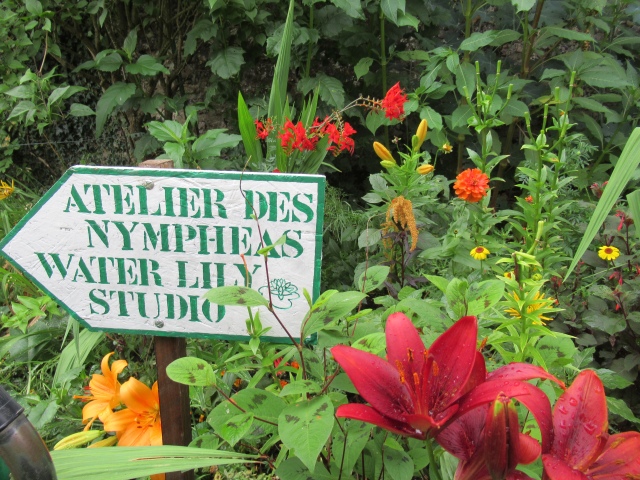 The concert was truly magical with four musicians playing in a room in the Chateau which had been the dining room and where the acoustics were excellent.

We are currently sailing quietly back up the Seine towards Paris having left Conflans-Sainte-Honorine just after lunch. The one in charge of the B’s went on an excursion to Chantilly Castle which was a mini Versailles and he enjoyed that. He had expected to visit the well known Chantilly horse racing track, stables and museum next to the Castle but time was too short on the day. But he did come home with all the money he went with so that is good!!! I had a walk across the road to the tiny village. It is a warm sunny day and we are expected to arrive in Paris around 9 pm. It is the Captain’s Gala Dinner tonight and we are all wearing our No 1s for the first time. Our berth is quite near the Eiffel Tower. Tomorrow morning a group of us are going shopping with the chef from ze boat to a market to buy products to come back and make a picnic lunch with – magnifique!

We depart Paris on Sunday morning to fly to Budapest where we board the Scenic Jewel to sail from Budapest to Amsterdam over the following two weeks. Our time in beautiful France is coming to an end but there are more adventures to come. We should have done research on the bathrooms in Hungary and the Netherlands but we simply have not had time so it is slightly possible more challenges await us.

Au Revoir from the Seine 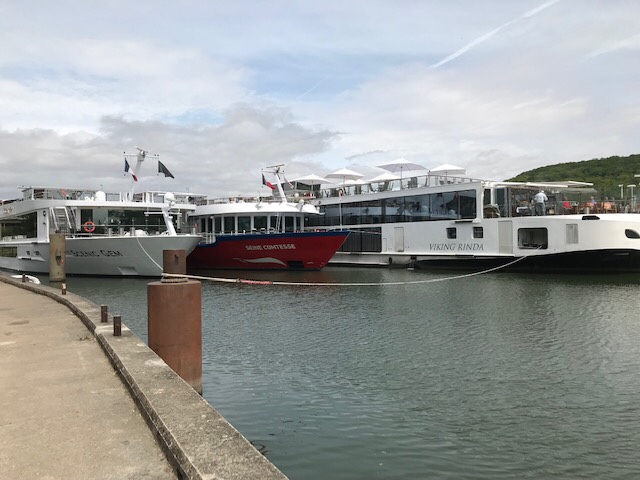 One thought on “Honfleur to Paris”